The Prophet Nuh (as) – Second of The Great Ones

By circlegroup On February 6, 2013 · Add Comment · In Featured Article

Sidna Nuh (calayhi-s-salaam) and the other prophets we are discussing in this series were all sent to re-balance their communities, and hence our world.  They are not just bringing a message; they are contravening this misbalance, ignorance, and savagery that exist in the world to this day, as we know.

HIGHLIGHTS OF THE SPEECH ON THE PROPHET NUH.  (LINKS TO THE FULL SPEECH BELOW.) 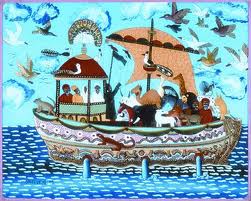 When we affirm the transcendental reality of Allah in every circumstance, we are affirming not only His presence and His immanence, but we are also acknowledging that in this dynamic there is no limit. Whatever we understand, Allah (Subhaanahu wa tacaalaa) is more.  As far as our imagination, understanding, or acceptance can reach, Allah (Subhaanahu wa tacaalaa) is more. At the foundation of this unity, and separation from unity, lies the reason why the ambiyaa’ and the messengers were sent to this world. Each of the ambiyaa’ transcended the limitations that were surrounding them:  Sidna Musa (calayhi-s-salaam) overcomes the Pharaoh, and the worshippers of the form of the golden ram.  Daoud (calayhi-s-salaam) overcomes Goliath (Galut).  Sulayman must convince with the Queen of Sheba (Bilqis) to be a believer; Prophet Isa (calayhi-s-salaam) [must deal with] the moneylenders; and, of course, Rasuulu-Llaah brings it full circle with the destruction of the idols in the Kaaba. The final transition will be with the Mahdi, who will bring a time of peace and the end of the world.

NUH AND THE IDOL WORSHIPPERS

To understand this story is to acknowledge the perfection of Allah (Subhaanahu wa tacaalaa), [al-Alali,] the Immanent.  But it is also to experience the patience, the knowledge, and the hikmah (wisdom) of the Messenger in his interface between what is immanent and what is apparent; between the potential of the individual or community, and the reality of what they are capable of.  This is the story of the contrast between humility and arrogance, a message resounding over the millenniums. As nations rise and fall, the deaf and blind followers of idols of stone, money, power, and fame lead others over the cliff to their demise—to a flood where few survive, and even the nearest and the dearest perish. But let us begin at the beginning.

The mindset of idol worship is one in which everybody is a victim of circumstance. Its correlative today is in animism.  Good people in the jungles of South America are animists.  Their whole lives are wrapped round the signs of what is happening.  If someone gets sick, some god needs to be propitiated.  If some stranger comes, it’s a threat and they have to expiate the sin that comes along with that person, as well as the flu and all the other diseases they bring.  There’s no goal in life that the people can themselves achieve, instead the worshipper is always looking for a sign, or a promise, or some kind of response…

PROPHET NUH AND HIS MESSAGE 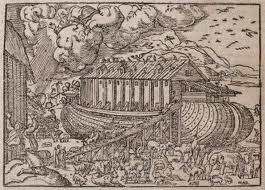 Sidna Nuh (calayhi-s-salaam) was the first major messenger after the Prophet Adam (calayhi-s-salaam), and the first prophet to encounter idol worship. He was a man, a warner, and a messenger who all the three major monotheistic religions of today remember and believe in as a prophet.  He told them that idol worship created differentiation and injustice, and weakness of the mind, and warned them not to worship anyone other than Allah (Subhaanahu wa tacaalaa). The people heard him, but did not listen.

Each of the prophets and messengers have carried this same message, bringing a remembrance of the incomparability of Allah, of our Creator, while seeking to unify our awareness of our own self with something that is so much greater that it transcends our capacities to understand, leaving only a taste/dhawq of the transcendent mystery.

THE RESPONSE OF THE DISBELIEVERS

The Prophet Nuh (calayhi-s-salaam) brought this message and warning, but the people of his community responded with ignorance and pride.  Certainly, the hearts of these people were sealed; they did everything they could to demean Nuh (calayhi-s-salaam) and lower him in the eyes of the other people. “There is no compulsion in Islam. I can’t make you choose the right way; make your decision. I have placed my trust in Allah (Subhaanahu wa tacaalaa).”

The depth and breadth of this story is endless as it applies to today.  The task, the courage, the faith to trust in Allah’s will and measure ones effort (i.e. reward) in those terms alone is overwhelming, and beyond the ken of most human beings today.  By the guidance of Allah (Subhaanahu wa tacaalaa), Nuh faithfully continued his appeal for 950 years.  He continued with patience, responding to the sarcasm, and ignorance, and anger, hour after hour, day after day, month after month, year after year, century after century.  He admonishes these people and calls them to Allah secretly and openly, in groups and in private conversation. He gives them examples and explains the signs… 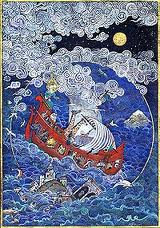 Sidna Nuh (calayhi-s-salaam) saw that not only was the number of believers not increasing, but it was decreasing. Then there came a day when Allah (Subhaanahu wa tacaalaa) revealed to Nuh (calayhi-s-salaam) that no others would believe; there were no more people left to convince. No one else was going to be born, no soul was coming to the world in this period of time, that was going to believe—because Allah knows every soul.  At his point, Nuh prayed…

…Allah (Subhaanahu wa tacaalaa) accepted Nuh’s prayer. He passed judgment on the disbelievers and ordered the Flood.  In some sense, it is hard for us to understand how or why Allah—the Universally Merciful and Singularly Compassionate—would wipe out an entire community.  But we must remember that at this point, Sidna Nuh has spent almost a millennium doing absolutely everything he can for the people, and now Allah (Subhaanahu wa tacaalaa) is telling him that the only thing possible is to save those from the community who are good.

The constant warning to the warners is that there are things one cannot understand and one should not try to grasp in any way, but through the love of Allah.  Knowledge of the reasons of Allah’s decrees and actions, and of the destiny of any human being in the Hereafter is in the realm of things beyond the reach of human perception; [this knowledge is] of the ghayb (unseen world).

Throughout history we have the messengers trying to share a message, but the only people who receive that message are the ones who really want knowledge. Today, we see that most people don’t want knowledge.  The message and the struggle to understand and accept it are still here today.  Here we are again, repeating the message, and the next flood could be coming.  Maybe the flood is out there already, and people are drowning in their own ignorance and arrogance…

…When we choose compassion and mercy, or patience and tolerance over arrogance and blame, excuse-making and anger, then we are choosing to be in the Divine Presence. Then we are buying our ‘flood insurance’ that will affirm the intention of Allah for our soul, written in the Book of Destiny (Lawhi Mahfouz).

What are the inner and the outer meanings of the flood? The tendency of many westerners when they embrace the spiritual path is to make analogies, to give meaning other than just the textual, theological meaning.  We want to interpret the story of the flood; maybe we don’t want to particularly believe there really was a flood.

THE SCIENCE OF MEMORY

We often ask: how are you supposed to learn from some other person’s experience?  How can we help our children to learn from our experiences—without them having to make the same mistakes that we have made?  Similarly, Allah (Subhaanahu wa tacaalaa) has provided for us the tools to learn—in an organic way—from the trials and struggles of our forefathers, through the words and memories of the Qur’an.  This is not just metaphorical, but also a scientific, reality.  There are brain scans / MRIs that show that when a person listens to music, certain parts of their brain were stimulated in the MRI.   A similar part in their brain was stimulated when they played the piano themselves, but the piano was rigged and made no sound.  They had a memory of being present in a past event. We all have a memory of all of these events –  the 950 years of perseverance of Sidna Nuh, the flood, the Ark.   When you are in remembrance, you are actually there, chemically, in your mind…

Discover more from Shaykh Rashid’s talk on the Prophet Nuh (as)  in the following venues:

Tagged with → idol worship • prophet Nuh • prophetic message • Sidna Nuh • spiritual guidance • the Ark. • the flood
The Circle Group > Featured Article > The Prophet Nuh (as) – Second of The Great Ones