The role of sacred art is to support the spiritual life of those whom it surrounds, to instill a way of perceiving the world and the subtle realities behind it. “Consider a point, dimensionless position in space. Extending the point defines a line. Turning the span of this line about the first point traces a circle, the first and simplest geometric plan figure and Unity’s perfect symbol.” Islamic Design: A Genius for Geometry by Daud Sutton

For many people the tile patterns of Islamic geometry are a lost tradition. Not so for today’s students at the Prince’s School for Traditional Arts. Contemporary artists are finding personal meaning and cause for reflection in the study of Islamic Sacred Geometry. The school, founded by Prince Charles, one of the Prince’s Charities, in the United Kingdom, is training artists to the traditional sacred arts of the world religions and the students are responding enthusiastically. 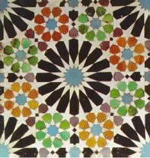 “Representational art has never had priority in Islamic culture. Patterns have always played an important and significant part in the way we adorn buildings, from the windows of a Gothic cathedral to the mandalas that underlie the sacred architecture in India. However, it is in Islamic art that this ‘sacred geometry’ is developed to the greatest extent, with artists willingly subordinating their individuality to the impersonal beauty of the work. ”  Maslaha.org

If we take the time to contemplate the structure and designs in traditional Islamic decorative art, we see reflected the embodiment of the religion itself. The inclusion of the individual within the whole and the reliance upon the individual, bridging to the family, extending to the community and expanding to the ummah of individuals.

Equilibrium is a characteristic spiritual quality in Islam. Islam is, in cyclic terms, a return to a primal equilibrium, and its geometrical crystalization is a result of this equilibrium.” The Abode of Peace

As Westernize art concentrates on individual expression and “originality” in Islam the artist sees himself as a humble servant of the community. using his ability in remembrance of Allah, The One God, The Eternal.

Geometry underlies nature itself. In a snowflake, in the movement of the planets. We find the star is a frequent motif in Islamic decorations. As a  regular geometric shape it “symbolizes equal radiation in all directions from a central point. All regular stars–whether they have 6, 8, 10, 12, or 16 points– are created by a division of a circle into equal parts. The center of the star is center of the circle from which it came, and its points touch the circumference of the circle. The center of a circle is an apt symbol of a religon that emphasizes one God, and symbol of the role of Mecca, the center of Islam, toward which all Muslims face in prayer. The rays of a star reach out in all directions, making the star a fitting symbol for the spread of Islam.” Jane Norman. Asia Society.org