By circlegroup On February 1, 2014 · Add Comment · In Featured Article 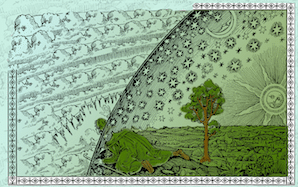 To those who faithfully believe, Allah gives some special knowledge of the Unseen.  These people exist throughout history as messengers, as guides, seen and unseen by us, past and present, and among us.   These unseen friends and helpers of Allah are recognized in Qur’an and Hadith, and we are guided to call out to them for help.  We are gathered here today to speak about one of the greatest of these great servants of Allah, someone known by many names, a hand of guidance that can be found in the pages of many spiritual traditions:  Al-Khidr, the Green One.

HIGHLIGHTS OF THE SPEECH ON Al-Khidr (as) by Shaykh Ahmed Abdur Rashid. Links to full speech below.

We say that the knowledge of all things, the known and the unknown, belongs to Allah. At the same time, He has established that there are those to whom special knowledge is given: faithful believers, messengers, saints, shuyukh. We have to choose to be of those guided to that knowledge. We have to remember that this is a choice to be made every moment of the day – eventually; continuously and constantly – to remember to remember. So many of the subjects you will hear today you have heard before, many of the admonitions, but framed in the story of whatever we know, or don’t know, or cannot know about Al-Khidr.

WHO IS THE GREEN ONE?

Literally, Al-Khidr means, “green one,” which represents what is fresh and new and eternal, the source of life. There are many stories about how he acquired that appellation…  In Sufic tradition, Khidr has come to be known as one of the afrād, those “who receive illumination direct from God without human mediation.” He is the hidden initiator of those who walk the mystical path, like some of those from the Uwaisi Tareeqa. Uwaisis are those who “enter the mystical path without being initiated by a living master.” Instead, they begin their mystical journey either by following the guiding light of the teachings of the earlier masters, or by being “initiated by the mysterious prophet-saint, Khidr.”

IN SEARCH OF THE TEACHER 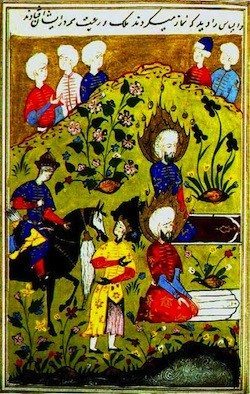 The story of Musa and Al-Khidr begins with Musa traveling in search of Khidr.  But what inspired that search for knowledge? The Prophet Musa was already the leader of his people; yet he becomes a student, a seeker of greater knowledge on a journey that humbles and challenges him…  Musa is willing to travel as long and as far as it takes to find the one whose wisdom is greater than his. Some say the phrase “go on for ages” meant “a year” in the dialect of the place.  Abdullah ibn Amr said it meant 80 years, and Mujahid said 70 years.  Ibn Abbas said it meant lifetimes.  “I am seeking the meeting place of the two seas,” is symbolic of the place where perfect knowledge exists, the place where esoteric knowledge and exoteric knowledge meet. Musa  represents the exoteric knowledge, and Khidr the esoteric knowledge. So the meeting of the two oceans was both literal and symbolic.

THE GIVING OF BAYcAT

When Musa a finally finds Khidr, he asks to follow him and become his student.  We don’t know if he was there when Musa was there the first time, and Musa a just didn’t see him, or if he showed up conveniently when they returned.  Obviously, he had knowledge that they were not going to be there at the first time they stopped, or they wouldn’t see him.  For people of tareeqah, this is often seen as the first example of the giving of baycat, and one of several places in Qur’an that exemplifies and supports this practice. We can see the importance of this practice from the very existence of Al-Khidr, from his role in the story, and from that fact that even the prophets of Allah sought out a teacher (in the form of Al-Khidr) to facilitate understanding of the Unseen and refinement of his character.

THE TEACHINGS OF AL-KHIDR

Despite the fact that Musa was a prophet, and he carried the Divine law from Allah to humanity, it still did not give him the subtle knowledge known to one who has become the direct recipient and instrument of Allah. Musa is shown all these events, shown how Allah responds to circumstances in order to benefit His creation, redirecting circumstances, using His servant as an instrument to accomplish his intended purpose. Through Khidr, Musa is given a lesson of the vast knowledge of Allah: how subtle it is, how momentary it can be, how specific and also how universal; how you can see it in one moment and forget it in the next.  As a prophet, Musa is already wise, but the story of Musa and Al-Khidr tells us that even with wisdom,  we don’t understand every inner meaning.

LEARNING TO ACCEPT THE INNER MEANINGS

TRAVELING IN THE HOMELAND

The Sufi draws many practical lessons from the stories of Al-Khidr.  Among these is the second principle of the Naqshbandiyya Order: safar dar watani / journeying in one’s homeland. As I have said, Al-Khidr is known as the Wanderer, the ever-traveling Dervish.  When Musa wished to study with him, he had to travel to the place where he would meet him.  And, rather than stay in one place as a student, he became Al-Khidr’s traveling companion, traveling across the land and sea to the various circumstances that they encounter. There’s an implication in the idea of travel that is a divergence from the common idea of living an ascetic life and being a spiritual individual. The outward journey through the world serves as a mirror for the traveler. There are a myriad of analogies and statements about the dimension of meditation, and the levels one goes through in each latifa, and in each transmission, and how everything in the outer reflects the inner, and everything in the inner reflects the outer.  This is a core of our teaching.

The first step on this inner journey to knowledge and understanding of the secrets of the unseen world is turning one’s attention away from the pursuits of the outer and diving into the inner journey.  In many stories and traditions, it is the voice of Al-Khidr, the hatif (or invisible caller) that directs those with potential to remember the inner journey. During a trip to Damascus with Ibrahim Ibn Adham, along with Yusef Ghusuli and Abdullah Sinjari, he asked Ibn Adham, “O Abu Ishaq!  Tell me about your beginning in this matter (meaning Sufism), and how did it come to be?” (Story related in full in transcript and talk).

We hear in this story the theme I began with of calling on help from the Unseen.  We hear also of the difficulty of the journey.  The speaker, who had clearly already achieved great wisdom, called out to Allah out of a feeling of being forsaken in solitude; yet, it was in his solitude that he found reliance on Allah.  As Ishaq al Balki reports, “My father related to me that he once asked Ibrahim Ibn Adham, ‘Advise me.’ He said, ‘Take Allah as your companion, and leave people aside.’” We see from the story that it is not always easy to turn away from this world and toward the inner.  The man in the story was a prince, surrounded by all the wealth and pleasures of this world, intent on riding and hunting. At first he fled from the voice of Al-Khidr, from the voice saying “‘By Allah, you were not created for this, nor was this what you were commanded to do.”

LESSONS FOR THE MUREED (Rules of Discipleship)

How do we begin to cross these obstacles (as Ibrahim Ibn Adham put it) on the journey? We need to strive to be in the presences of those who are wise and know more than us: the shuyukh. For Sufis and seekers on the Path, the story of Musa and Khidr has a very special importance.  It is the model of one who seeks and follows a teacher.  It holds many specific lessons on conduct for the mureed, or would-be mureed.  The conditions of conduct that are required, necessary even, for all of us mureeds have been stated in many different ways over the centuries.  These conditions are numerous, but some of the most important ones are as follows. (The Shaykh then relates expounds upon 6 Duties).

CONCLUSION: CALLING THROUGH THE UNSEEN

I began today by reminding you that Al-Khidr is the first among the unseen beings and guides who are among us, guides and helpers who we are encouraged to call up on for help.  I will end by returning to this instruction, as a practical and daily way we can open our self to the constant flow of knowledge and assistance of Allah that is available, flowing to us.  We may think that having a relationship to the unseen world is just for saints and mystics.  But the truth is we all have a relationship with the unseen world, every day.

Discover more from Shaykh Rashid’s talk on the Al Khidr  (alayhi-s-salaam) in the following venues:
Tagged with → faithful believers • Islamic saint • messengers • prophets • saints • the green one • virtues of a prophet
The Circle Group > Featured Article > Strangers: Al Khidr (as)