Lecture at Islamic Center in Richmond 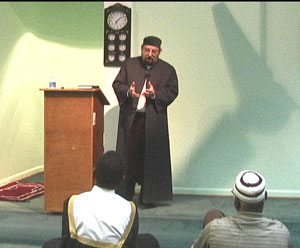 Shaykh Ahmed Abdur Rashid was invited to speak at the Islamic Center in Richmond, Virginia, on March15, 2009.

THE PROPHET MUHAMMAD: THE UNIFYING VOICE OF ISLAM

Praise be to Allah, the Turner of the hearts and sight.

O Allah, fix our hearts on the best of Your ways,

and make us face You in our way, and bestow blessings on the beloved intercessor,

the mercy of all the worlds, the lighthouse of the survivors, the harbor of the knowers.

The opportunity to speak on the life and example of of Nebi Muhammad (s.alla-llaahu  ‘alayhi wa sallam) is an opportunity to place the Prophet’s love of Allah (Subh.aanahu wa ta’aalaa) and his subsequent role as Messenger to humanity in the right perspective. The perspective of “NOW”.  The Prophet (s.alla-llaahu  ‘alayhi wa sallam) plays a role in our day-to-day existence as a model for life.  More than this, he is a metaphor for the love of Allah (Subh.aanahu wa ta’aalaa)-and for love itself.

Human beings today, especially in the Westernized world, (which I remind you is everywhere, not just in the West)  hold such fragmented perspectives that even the subject of love has become compartmentalized.   It has come to connote primarily physical relationships and love of objects.  But it must also be understood as eshq and the accompanying ecstasy (wajd) that provides a seamless awareness and consciousness of swimming in the ocean of Rahmat that is Allah, that is Al Haqq.

Each day, our worldly lives confront us with the contrasts between the reality of dunya, and the reality within the deep recesses of qalb:  in the world of love and total submission.   Life is filled with vicissitudes, with alternating experiences of nearness and distance from Allah (Subh.aanahu wa ta’aalaa), from Nebi Muhammad (s.alla-llaahu  ‘alayhi wa sallam), and from one another.  The challenges and demands of love, the surrender and trust of love, are often all too intertwined.

What is this eshq, this love?   It comes from the word ashiq:  to love passionately; to be loved passionately.  It also implies a seamless connection.  It has no beginning, no ending.  It is only the Love of Allah (Subh.aanahu wa ta’aalaa).

The lover and the beloved are drawn together in their himma (ardor, eagerness, and yearning) for one another.  We all know this Love.

Himma is a yearning that is disquieting.  It preoccupies the lover.  So, too, it suggests an element of distress.  Grief, worry, even affliction:  all are part of himma.  This himma-this affliction of love (eshq)-has two sides, as we see in the life of the Prophet (s.alla-llaahu  ‘alayhi wa sallam).  On the one hand are the anxieties of life.  Yet, amidst these anxieties can be found magnanimity, heroism, gallantry (humam); solicitude, care, and attentiveness (ihtimam); the gentle lulling of a baby to sleep with a lullaby (tahmeema).   In himma, we begin to understand the seeds of love that were planted in the soil of our souls long ago, to be grown to their maximum potential in the light, the Nur-i-Muhammad.

The himma that rises in our hearts, that turns our lives around, is a metaphor for unity (tawhid).  Tawhid is the reality (and the only reality) that is Islam:  this seamlessness of passion and love.

Unity: The Basis of Islam

Tawhid is the basis of Islam, the Unity that is Allah (Subh.aanahu wa ta’aalaa) the thread that unites all the seemingly disparate aspects of our lives.

Outwardly, tawhid manifests in community (ummah).  Consider the many forces that serve to unify people within Islam.  All believers are called to bear witness to one Truth, al Haqq.  All are held responsible for the same burden: the khalifat for which Allah (Subh.aanahu wa ta’aalaa) created us.   All are mandated to care for one another, as the Prophet instructed us:

…bestow their food on the poor, the orphans, the needy and captives; who feed you for the sake of Allah and seek from you neither recompense nor thanks. (76:8-9).

Finally, all believers are enjoined to be a unified community, functioning as a cohesive whole for the good of humanity.

And hold fast all together by the rope Allah stretches out to you, and be divided not among yourselves.  And remember with gratitude Allah’s favor on you, for you were enemies and He joined your hearts in love, so that by His grace you became brothers…(3:103).

And let there be of you an ummah to call to the good, to enjoin virtue and forbid vice.  Those who do so are the felicitous (3:104).

As Muslims, we see tawhid as a fundamental principle; “creating unity” is therefore an oxymoron.  Fragmentation and disunity are more apparent than real.  Unity always underlies our diversity.  Without the foundation of tawhid, without the sense of community, without diversity in unity, there could be no Islam.

Yet, Muslim societies today are fraught with schisms.  Fear and contractiveness characterize much of the communication among our brothers and sisters.  One need spend only a short time on the Internet to come across dialogues turned into diatribe.  The sweet, subtle melody of the love of Nebi Muhammad (s.alla-llaahu  ‘alayhi wa sallam) is lost under a cacophony of  takfir.

How far we have come from the himma of the lover for the beloved!  How distant we are from the seamless, ceaseless exchange of love (hubb) between the Lord (Subh.aanahu wa ta’aalaa) and his Prophet (s.alla-llaahu  ‘alayhi wa sallam), and between the Prophet (s.alla-llaahu  ‘alayhi wa sallam) and his Lord (Subh.aanahu wa ta’aalaa).

Let us look again at the word hubb, and how comprehensive it is.

Hubba means to love, to evoke affection, amicability.  Habeeba means beloved, sweetheart.  Related words include habaab (aim, goal); muhabbab (agreeable, pleasant, desirable); and tahabub (mutual love, concord, harmony).  Mahabba is the love that rises up in the heart.  Ahabba describes the state of the camel who kneels down and refuses to stand up again.  Such is the determination of the lover, who will not budge from the state of love.

From the same root comes the word habbaa, meaning “seeds.”  In the thirty-third ayat of Sura Ya Seen, we read,

And the sign to them is the lifeless earth in winter.  We give it life and bring forth from it seeds so that from it, they may eat of it (36:33).

A Model of Kindliness, Compassion, and Tolerance

How aware are we of the limitless ability of the Prophet (s.alla-llaahu  ‘alayhi wa sallam) to love and respect others, without distinction of race or creed?

Following the Battle of Badr, a Meccan by the name of ‘Umayr ibn Wahb of the Quraysh came to Medina, intent upon killing the Prophet.  As he approached the mosque where the Prophet (s.alla-llaahu  ‘alayhi wa sallam) was, Umar ibn Khattab (radiy Allahu Ta’aalaa anhu) took note of his sword and moved to stop him.  But the Prophet (s.alla-llaahu  ‘alayhi wa sallam) called to Umar to let the man enter.  Inviting Umayr to sit near him, he began to speak to the would-be assassin.  He talked to ‘Umayr with great affection, kindness, and sweetness.  Then, he recounted in exact detail the assassination plot that he and an accomplice had devised.  ‘Umayr was astonished, for they were the only two who had known of their intentions.  So impressed was he by the Prophet’s insight and generosity that he accepted Islam.  Nebi Muhammad (s.alla-llaahu  ‘alayhi wa sallam) neither reprimanded nor punished ‘Umayr for having set out to kill him.

What kind of power lies in an individual who could unify enemies and strangers?  How many people in the history of humanity has remained a major global force, more that 1400 years after their passing?  Clearly, we are discussing a person of strength and courage, gentleness and concern.

Not only in words but in deeds, the Prophet (s.alla-llaahu  ‘alayhi wa sallam) was true to the guidance:

He avoided attending the Taraweeh prayer one night because he did not want to place an undue burden on the believers.  He arrived at the mosque, saw the people gathered, and retreated to his quarters, for he realized that if he did the prayer every evening, it would be interpreted as a fard.  On another occasion, when Mu’adh (radiy Allahu Ta’aalaa anhu) extended the congregational prayer, the Prophet (s.alla-llaahu  ‘alayhi wa sallam) said, “O Mu’adh!  Are you putting the people on trial?”  He repeated this three times, ensuring that Mu’adh understood his disapproval.

O, Allah!  Forgive my companions for abandoning me.  They are ignorant.  I remain with them, because I am your servant and slave, in order to illumine their hearts.

If we aspire to be counted among the lovers of Nebi Muhammad (s.alla-llaahu  ‘alayhi wa sallam), then surely we must contemplate, humbly and sincerely, where we stand in the long shadow of the Prophet (s.alla-llaahu  ‘alayhi wa sallam).  How do we act towards our families and neighbors, let alone our enemies?  How do we respond when we see others in pain, misery, grief, loss, and disbelief?….

To hear the complete lecture:

Audio clip: Adobe Flash Player (version 9 or above) is required to play this audio clip. Download the latest version here. You also need to have JavaScript enabled in your browser.